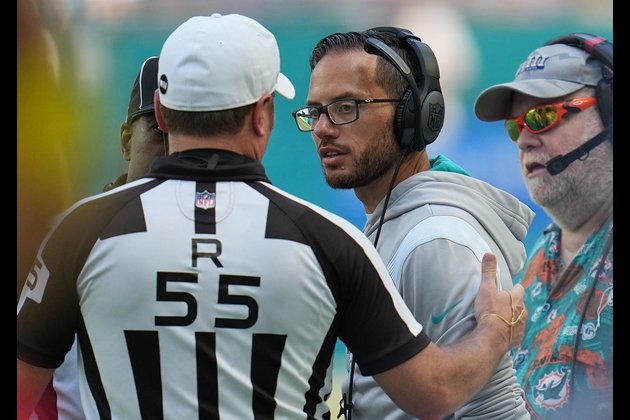 Suddenly, the Miami Dolphins are in disarray.

With their season-opening winning streak over and their handling of quarterback Tua Tagovailoa's head injuries the hot-button topic in the NFL, the Dolphins will face the New York Jets in East Rutherford, N.J., on Sunday, looking to stay in first place in the AFC East.

It's a drastic contrast to the first three weeks of the season. Miami took each of those first three games -- including a thrilling come-from-behind win against Baltimore in Week 2 and a victory over top AFC East rival Buffalo a week later.

In the triumph over Baltimore, Tagovailoa tied a franchise record -- held by legends Dan Marino and Bob Griese -- with six touchdown passes. He also threw for over 400 yards in an NFL game for the first time, finishing with 469.

"It was a moment that he will never forget," Dolphins first-year coach Mike McDaniel said of Tagovailoa engineering a comeback from a 21-point Baltimore lead.

Now, though, everything is different.

The Dolphins lost last Thursday, 27-15, at Cincinnati, and Tagovailoa suffered a blow to the head for the second straight week, drawing an investigation into Miami's handling of the situation. The NFL itself is under fire for its concussion protocol.

Against the Jets, the Dolphins will start quarterback Teddy Bridgewater.

Bridgewater, a 29-year-old Miami native, is 33-30 in 63 NFL starts with four franchises. This will be his first start with his hometown team.

In his first significant action with Miami, he went 14-for-23 for 193 yards, one touchdown and one interception off the bench against the Bengals.

Known as an accurate passer and a solid game manager, Bridgewater is 2-0 in two career starts against the Jets, completing 73.1 percent of his throws in those games.

New York, however, is coming off its best win of the season. Back from knee surgery, second-year quarterback Zach Wilson made his 2022 debut with a rousing 24-20 comeback win over the host Pittsburgh Steelers last Sunday.

"Some of the most fun I've had playing football," Wilson said.

Trailing by 10 points in the fourth quarter, Wilson rallied the Jets to touchdown drives of 81 and 65 yards on their final two possessions, with Breece Hall providing the late-game heroics by finding the end zone from 2 yards out with 16 seconds left.

Wilson showed some rust --going 18-for-36 with two interceptions -- but he also passed for 252 yards and a TD.

In the fourth quarter -- when it counted most -- Wilson was fantastic, completing 10 of 12 passes for 128 yards and one touchdown. He completed his final seven passes, including a 5-for-5 showing for 57 yards on the final drive.

Wilson, who went 3-10 as a starter last year, is playing behind a banged-up offensive line. He was pressured 14 times by the Steelers, who hit him six times and sacked him once.

That line could be an area Miami can exploit on Sunday. Already this year, the Jets have lost their top four offensive tackles. When Max Mitchell got hurt on Sunday, they moved guard Alijah Vera-Tucker to tackle.

Fortunately for the Jets, Wilson said his knee feels great, and his confidence is rising. He also has some prime weapons, including rookies Hall and Garrett Wilson and veteran receiver Corey Davis.

Wilson (ankle) and Hall (knee) were both limited in practice on Wednesday, though. Mitchell (knee) did not practice.