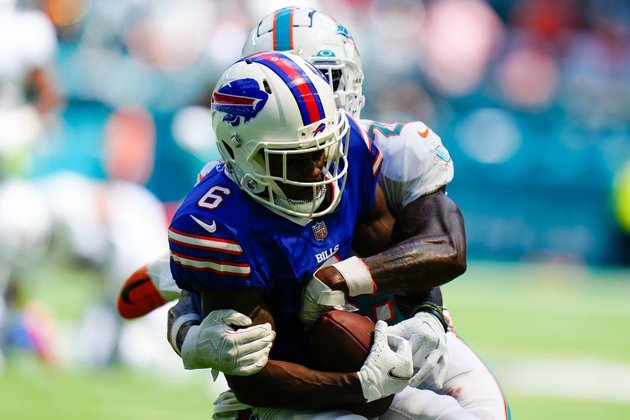 Tua Tagovailoa returned from a second-quarter injury scare and the Miami Dolphins used a late a goal-line stand to hold off the visiting Buffalo Bills for a 21-19 victory on Sunday.

Buffalo (2-1) was led by quarterback Josh Allen, who completed 42 of 63 passes for 400 yards, two touchdowns and no interceptions. He also rushed for a team-high 47 yards.

Tagovailoa left the game with 2:19 left in the second quarter as the back of his head hit the turf on a shove from Bills linebacker Matt Milano.

However, Tagovailoa returned for Miami's first third-quarter possession. He finished 13-of-18 passing for 186 yards with one TD and no picks.

The teams were tied 7-7 after the first quarter and 14-14 at halftime.

For the eighth straight game, Buffalo scored a touchdown on its first drive. This time, on fourth-and-goal from the 2, Allen beat Brandon Jones' safety blitz, flipping a pass into the vacated spot to Devin Singletary.

Miami tied it on Edmonds' 1-yard run. That score was set up by Dolphins safety Jevon Holland's strip sack, recovered by Melvin Ingram.

After Bass missed a 38-yard field goal with a wobbly kick wide left, Miami took its first lead of the game at 21-17 on a 3-yard Edmonds run. Waddle keyed that drive with two catches for 77 yards.

After Allen threw incomplete on fourth-and-goal with 1:49 left in the game from the Miami 2, the Dolphins went three-and-out.

However, Dolphins punter Thomas Morstead had his punt blocked out of the end zone for a safety.

The Bills had one more chance but time ran out as they reached Miami's 41-yard line.