Bengals sack Jets to get into win column 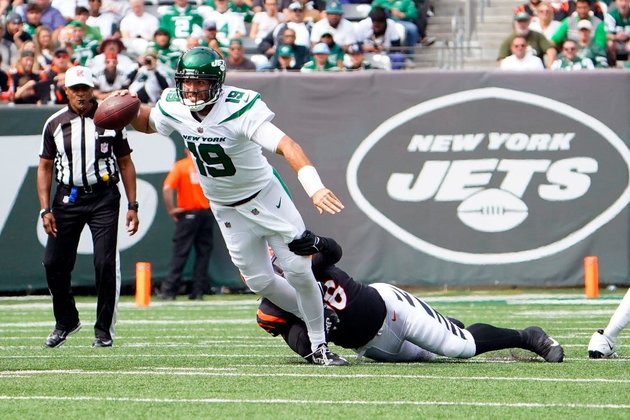 Joe Burrow threw for 275 yards and three touchdowns to lead the Cincinnati Bengals to a 27-12 victory over the host New York Jets on Sunday in East Rutherford, N.J.

Burrow, who went 23-for-36 passing, threw touchdown passes of 12, 56 and 5 yards for the defending AFC champion Bengals (1-2). Cincinnati never trailed against the Jets (1-2), who committed four turnovers.

Joe Flacco went 28-for-52 passing for 285 yards with two interceptions and two lost fumbles. Tyler Conklin had eight catches for 84 yards and rookie Garrett Wilson finished with six receptions for 60 yards for the Jets. Michael Carter rushed for 39 yards on 11 carries.

Leading 20-9 at halftime, the Bengals took over at the Jets' 24-yard line early in the third quarter after Trey Hendrickson forced Flacco to fumble and BJ Hill recovered. Four plays later, Burrow threw a 5-yard scoring strike to Chase to extend their advantage to 27-9 with 12:02 left in the quarter.

After the Bengals took a 7-0 lead on Burrow's 12-yard touchdown pass to Perine with 9:35 left in the first quarter, the Jets' next two drives ended with Zuerlein field goals that pulled New York to within 7-6 with less than two minutes remaining in the opening period.

The Bengals, however, struck back on the final play of the first quarter, as Burrow threw over the middle to Boyd, who broke two tackles and raced into the end zone for a 14-6 lead.

Evan McPherson kicked 22- and 43-yard field goals in the second quarter to give the Bengals a 20-6 lead before Zuerlein's 52-yarder cut the margin to 20-9 at the half.