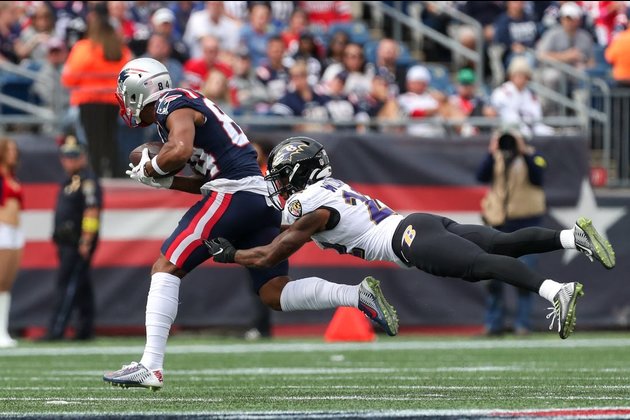 Lamar Jackson threw for four touchdowns and rushed for another as the Baltimore Ravens held off a late comeback attempt to defeat the New England Patriots 37-26 on Sunday at Foxborough, Mass.

Jackson completed 18 of 29 passes for 218 yards and had 107 yards on the ground on just 11 carries. Mark Andrews had eight receptions for 89 yards and two touchdowns for Baltimore (2-1).

New England cut its deficit to 31-26 after Rhamondre Stevenson's 1-yard rushing touchdown with 12:39 left to play but the Patriots failed to convert a two-point conversion.

New England (1-2) then turned the ball over on its next three possessions. After throwing an interception on the last drive of the game, Patriots quarterback Mac Jones limped off the field with an apparent left leg injury.

Jones threw for 321 yards and three interceptions on 22-of-32 passing. He rushed for one touchdown. DeVante Parker led all receivers with five catches for 156 yards for New England, while Stevenson and Damien Harris each rushed for one score.

The Patriots burst out of halftime, driving 75 yards in seven plays in just under three minutes to go up 20-14. Harris finished off the march with a 2-yard rushing TD.

Baltimore's Justice Hill rushed 34 yards to the New England 6 on the ensuing drive, setting up Jackson's 1-yard touchdown pass to Josh Oliver for a 21-20 Ravens lead. It was Oliver's first career touchdown.

In the first half, Jonathan Jones intercepted Jackson's pass intended for Rashod Bateman with 8:12 left in the second quarter and returned it to the Baltimore 32. The Patriots took advantage of the short field as Jones walked untouched into the end zone from 3 yards out for a 10-7 lead.

However, Jackson's 16-yard scoring strike to Andrews with 30 seconds left in the first half put the Ravens back on top. The Patriots pulled within 14-13 before the break, on Nick Folk's 50-yard field goal as time expired in the second quarter.

Jackson also connected with Andrews in the first quarter on a 5-yard shovel pass to get Baltimore on the board.