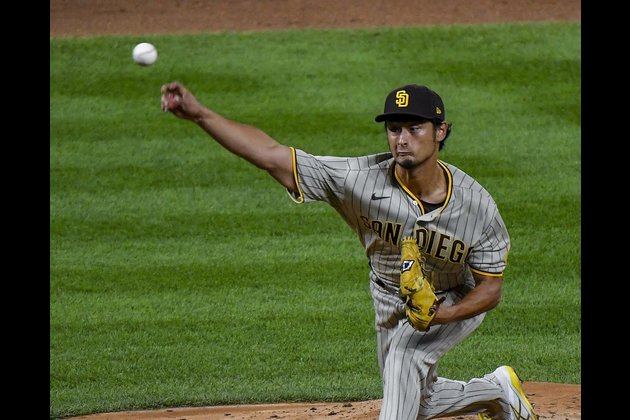 Jake Cronenworth and Ha-Seong Kim had two-run singles for the Padres.

The win was just the Padres' (84-68) second in nine games in Denver this season. The win also moved the Padres back into the second slot in the National League wild-card race. Colorado fell to 65-87.

Darvish (16-7) allowed five hits and a walk, with eight strikeouts.

The Padres took a 2-1 lead in the third on a lead-off double by Austin Nola and a two-out RBI double by Manny Machado. Both doubles off Rockies starter Chad Kuhl were lined just inside the left field foul line. Cronenworth followed with an RBI single.

The Padres made it 3-1 in the top of the fifth. Jurickson Profar singled with one out, moved to third on Juan Soto's double and scored on Machado's grounder.

The Rockies reduced the lead to 3-2 in the bottom of the inning. Sean Bouchard doubled to lead off, moved to third on Brian Serven's single and scored on Yonathan Daza's sacrifice fly. A diving catch by Trent Grisham in right center to end the inning prevented the Rockies from tying the game.

Kuhl (6-10) suffered the loss, giving up three runs on six hits and two walks, with six strikeouts in 5 2/3 innings. But it was relievers Justin Lawrence and Chad Smith who gave up the six runs in the seventh.

With Lawrence pitching, Profar doubled with one out ahead of walks drawn by Soto and Machado. Cronenworth followed with his two-run single to give the Padres a 5-2 lead. Brandon Drury greeted Smith with a single to reload the bases. Josh Bell then drew a bases-loaded walk. Kim hit a grounder to short that rolled under the glove of the charging Ezequiel Tovar, with two runs scoring on what was scored a hit.

Randal Grichuk homered off Tim Hill in the bottom of the eighth for the Rockies' final run.