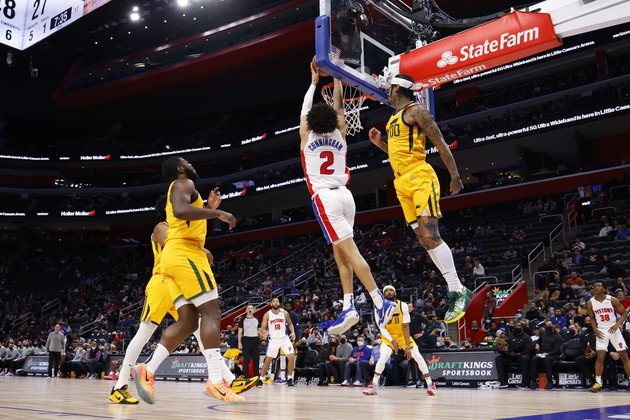 The Utah Jazz have one of the top four records in the Western Conference and are playing in Salt Lake City on Friday night, yet a matchup against the Detroit Pistons is hardly the pushover that it might seem.

The Jazz have lost six of seven games and they blew a 13-point, second-half lead Wednesday night in a home loss to the Houston Rockets, who allow the most points in the NBA. Utah scored 111 in the five-point defeat, under their NBA-leading average of 114.8 per contest.

Just a week and a half ago, Utah squandered an even bigger second-half lead. The Jazz were up by as many as 22 points on Jan. 10 at Detroit yet fell 126-116 as Detroit poured it on with a 78-point second half.

"There's a pattern of our group losing focus on things that we need to do to win the game," Jazz coach Quin Snyder said.

Some young players have erupted against the Jazz during Utah's recent skid. Cade Cunnigham and Saddiq Bey each scored 29 points for the Pistons, and Garrison Mathews led Houston's charge with 23 points.

It's defensive lapses one night, offensive woes another night for Utah. Rudy Gobert has missed games in COVID-19 protocol, while Donovan Mitchell has been sidelined in concussion protocol. It's uncertain if Mitchell will be allowed to play Friday.

Those off nights have been more of a common occurrence lately.

"We've proved that we're not just going to walk in and win games. We've also proved that we can be a really, really good team," Jazz forward Joe Ingles said. "We'll watch (film) and keep trying to get better as the season goes on, and have another crack on Friday."

The Pistons also are struggling to find consistency, but they're coming into Friday's game with the boost from the previous matchup against the Jazz and an exciting victory at Sacramento on Wednesday night.

Detroit finished with an 11-point flurry against the Kings to earn a 133-131 victory. The late-game run was capped by Cory Joseph's mid-range jumper with 25.9 seconds left. It was a bit of revenge for Joseph, who was traded to the Pistons from Sacramento last year. He finished with 19 points and nine assists.

Bey led the Pistons with 30 points, and Kelly Olynyk had 22 points with nine rebounds while playing in his first game since November after suffering an MCL sprain.

"They showed the resilience that we have to have," Detroit coach Dwane Casey said. "These are the dog days of the season, right before the All-Star break. You mentally have to get ready to go. We had some big-time defensive breakdowns down the stretch. We weren't disciplined on switches. (But) we found a way."

Finding a way is what the Jazz desperately need.

"There's clearly things we need to figure out and get better at," Ingles said. "I don't think it's a time to go inwards and be frustrated. Everyone's got to obviously look at themselves, but we've got to figure this out together and come out on Friday and be a lot better than we have been."