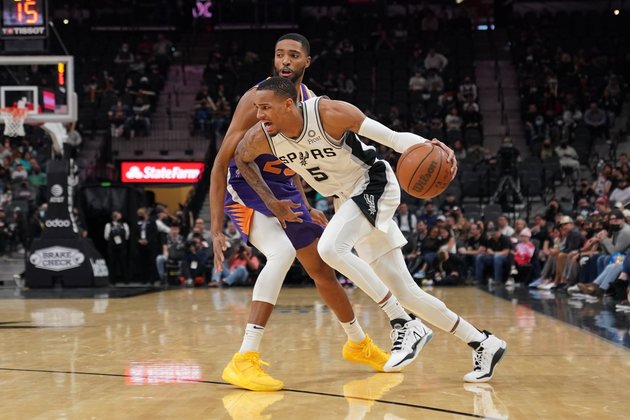 The San Antonio Spurs have finally been able to put the team they want on the floor in recent games and have seen tangible results in advance of their contest with the short-handed Brooklyn Nets on Friday in the Alamo City.

The Nets don't have that luxury -- but they do have the services of All-Star guard Kyrie Irving, who's been back with the team for about two weeks but cannot play in home games because of his refusal to get vaccinated for COVID-19.

The Spurs have won two of their past three games and face Brooklyn after a dominating 118-96 victory at home over Oklahoma City on Wednesday. Dejounte Murray amassed a 23-point, 14-assist, 10-rebound triple-double (his eighth of the season) in just three quarters to lead a balanced San Antonio attack.

Doug McDermott added 20 points for the Spurs in the win over the Thunder, with Devin Vassell scoring 19, Keldon Johnson and Jakob Poeltl hitting for 13 points apiece and Derrick White netting 11.

San Antonio got double-figure scoring from each of its starters for the second straight game. The Spurs have won 11 of their 18 games this season when their preferred starting five (Murray, McDermott, Poeltl, White and Johnson) have played.

"Any team is better when it has its starting five, but for us being a young team and not having played long enough together, it's very nice to have that luxury," Spurs coach Gregg Popovich said after the win over Oklahoma City. "They're all healthy, and it's good to have that complement of players. They played well at both ends.

"We were aggressive, solid on defense and on the boards, and I thought we shared pretty good. We had 32 assists, so that's a good sign."

McDermott said the team believes it can make a run and win more games in the season's second half.

"When we've had that starting five out there, I feel like we've played some really good basketball." McDermott said. "We've beat some really good teams. Unfortunately, the virus hit us, but here we are. We've got about halfway to go, and we feel like we can still make a pretty big run at this."

San Antonio should be bolstered by the addition, perhaps on Friday, of Juancho Hernangomez, who on Wednesday was acquired from Boston in a three-team trade that sent Bryn Forbes to Denver.

The Nets head to San Antonio after a 119-118 win at Washington on Wednesday in which Irving was able to play and scored 30 points in 37 minutes on the court. Brooklyn, which has won two of its past three games, was without Kevin Durant (left knee injury) but held on after squandering a 16-point lead.

LaMarcus Aldridge added 27 points off the bench for the Nets, who have just five wins in their past 12 games. James Harden scored 18, Patty Mills had 17 and Day'Ron Sharpe tallied 14 points in only 15 minutes of court time for Brooklyn in the victory.

"We made just enough plays defensively to get the job done," Nets coach Steve Nash said. "Offensively, we were a little stagnant -- we had a hard time getting to actions. We isolated a little bit too much, got a little bit too predictable. In the fourth quarter we didn't play great but found a way and that gives us a little bit of confidence, a little bit of resolve that we can lean on."

Friday's game is the third of a four-game road trip for the Nets.

The NBA announced Thursday that Irving was fined $25,000 for an interaction with a fan during the Nets' loss at Cleveland on Monday.