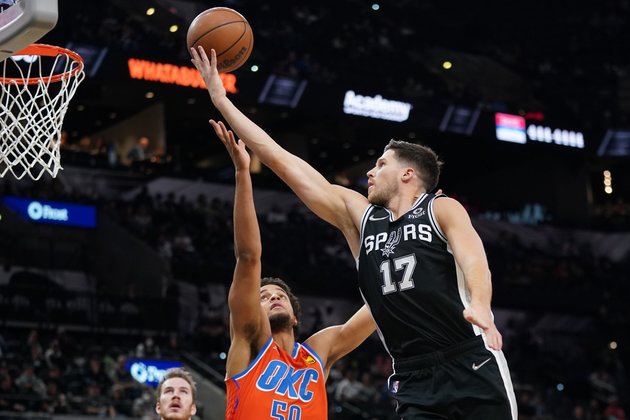 The win was the Spurs' second win in the past three games.

San Antonio sprinted away from a close game in the early minutes, building a 10-point lead after one quarter that stretched to 18 at the half and as many as 28 in the third quarter while the starters on both teams were still in the game.

All five of San Antonio's starters had scored in double figures midway through the third, marking the second straight game that each starter for the Spurs had at least 10 points.

The triple double for Murray was his eighth of the season, placing him behind only Nikola Jokic of Denver and the Lakers' Russell Westbrook, both of whom have nine.

San Antonio was down a man on the roster while awaiting the arrival of Juancho Hernangomez, who earlier in the day was acquired from Boston in a three-team trade that sent Bryn Forbes to Denver.

The Spurs led for all but the first five minutes of the game, breaking a 9-9 tie with 7:36 to play in the first quarter with a 10-3 run over the ensuing three minutes. San Antonio led 32-22 at the end of the period.

The Spurs extended their lead to 57-39 on White's floater with 3:51 to play in the second period and went into halftime up 69-51 after Murray's 3-pointer with 32.2 seconds remaining in the half.

Four Spurs had scored in double figures in the first half, led by Vassell's 14 points off the bench. Murray had 13 points and 7 assists in the first two periods, White hit for 11 and Johnson tallied 10 as San Antonio outshot the Thunder 52.9 percent to 38.8 percent.

Wiggins led the Thunder with 11 points in the half. Gilgeous-Alexander added 10 after going 4-of-13 from the floor over the first 24 minutes.