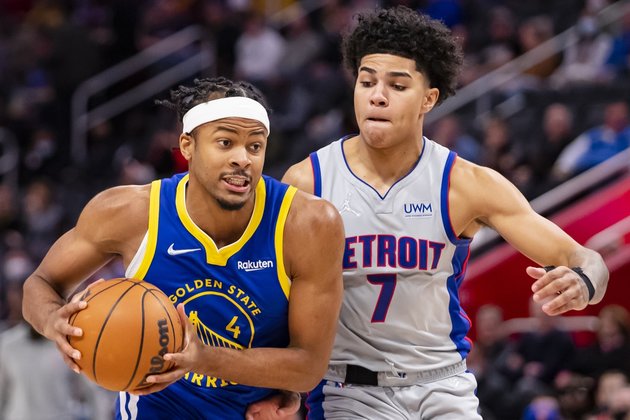 The Golden State Warriors embark upon what was supposed to be their most enjoyable two weeks of the season with some trepidation when they host the Detroit Pistons on Tuesday night in San Francisco, Calif.

The seven-game homestand that runs through Jan. 29 was supposed to feature a handful of cupcakes, the completion of Klay Thompson's transition back to stardom and the reappearance of James Wiseman.

Instead, the Warriors stagger into Tuesday's homestand opener playing their worst basketball of the season, not having seen the Thompson of old and not haven't seen Wiseman at all.

And now Draymond Green is out for at least the rest of the month with a disk issue in his back, Stephen Curry is fighting a sore hand as well as a prolonged slump, and some of the cupcakes -- including the Minnesota Timberwolves, who shellacked the Warriors on Sunday -- don't appear as palatable as originally thought.

Speaking about Green's injury when he easily could have been talking about himself, Thompson offered a big-picture outlook on the current situation.

"It's unfortunate, but we've all been through injuries; there's no point in rushing back in mid-January," he observed. "We're playing for something much bigger than that, and when Dray does step on the floor, I'm going to be very grateful playing with him again."

Curry's hand injury, suffered in a fall in Friday's win at Chicago, is not considered to be serious. He'll have to test it during warmups Tuesday before making a final call on whether or not to face the Pistons.

While Wiseman has had to undergo a further arthroscopic procedure on his knee, there have been no issues with Thompson's health in the wake of ACL and Achilles injuries. He has gone from 20 to 21 to 23 minutes in his last three games, but still hasn't shot 40 percent in any of his four comeback efforts, going a combined 35.7 percent both overall and on 3-pointers.

Losers of five of their last seven after Sunday's Green- and Curry-less 119-99 blowout loss at Minnesota, the Warriors will face a Pistons team that has won three of its last five as it tips off a four-game western trip.

Those three wins, including a 126-116 shocker over the Utah Jazz, all came at home. The Pistons have lost 13 of their last 14 road games.

The Pistons had hoped to showcase highly coveted forward Jerami Grant on their western swing, but announced over the weekend that he is not ready to return from a thumb injury. He will continue his rehab closer to home with the Motor City Cruise of the G-League

Instead, the trip will give Detroit a chance to show off rookie Cade Cunningham, who has responded to a challenge from Miami's Omer Yurtseven in the Rookie of the Year race with three outstanding efforts in his last four games.

One of those showings for Cunningham came in Sunday's 135-108 home loss to the Phoenix Suns, but it was short-circuited after 25 minutes when Cunningham was given technical fouls for taunting and then complaining following a spectacular dunk that completed his 21-point performance.

"We're not in position as a team to complain. Let me be the bad guy to fight for us," Pistons coach Dwane Casey said in a teaching moment afterward. "As a young team, we shouldn't get that reputation of complaining to officials. Until we get to that level, we have to button up and zip up and play our butts off."

Cunningham has averaged 19 points on 51.7 percent shooting in his last four games.