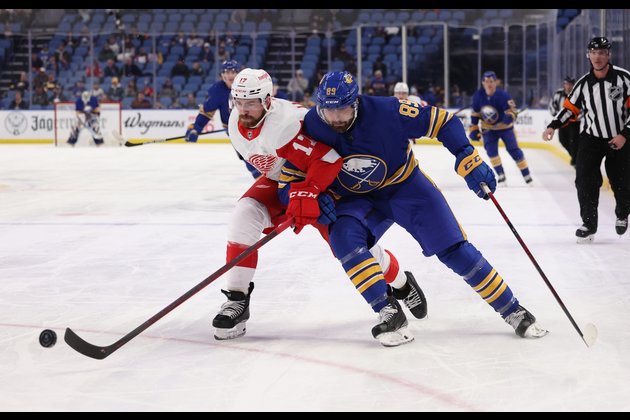 Dylan Larkin scored two goals, including the game-winner 2:07 into overtime, and the visiting Detroit Red Wings rallied from a two-goal, third-period deficit to defeat the Buffalo Sabres 3-2 on Monday afternoon.

Detroit, which defeated Buffalo 4-0 at home on Saturday, completed a sweep of the four-game season series. Three of those games were decided in overtime.

Larkin's 18th goal of the season was set up by Nick Leddy, as he ripped a shot past goaltender Aaron Dell's glove.

Vladislav Namestnikov had the other goal for Detroit while Alex Nedeljkovic, who recorded the shutout two nights earlier, made 26 saves.

Henri Jokiharju and Jeff Skinner scored for the Sabres and Dell stopped 32 shots.

The Red Wings had a season-high 22 shots on goal in the first period Saturday. They only managed five on Monday as Buffalo gained a 1-0 advantage.

The Sabres won a faceoff in Detroit's zone and Jokiharju took a shot from the point that got past a screened Nedeljkovic. Jokiharju's second goal of the season was assisted by Rasmus Dahlin and Skinner.

Detroit had nearly twice as many shots on goal in the second period but the score remained the same.

An apparent Buffalo goal midway through the second period was nullified after a coach's challenge when the play was deemed offside.

Detroit's Robby Fabbri had a quality chance five minutes into the third period but Dell made the save with his right pad. Two minutes later, Dell denied Pius Suter from point-blank range.

Buffalo soon made it 2-0. Skinner collected a loose puck near the Detroit net, spun around and scored his 14th goal of the season with 10:39 remaining. Tage Thompson had the assist.

A failed coach's challenge gave Buffalo a power play but the Red Wings instead converted their third short-handed goal of the season. Namestnikov's 11th goal was set up by Moritz Seider and Tyler Bertuzzi.

Larkin came off the bench and fired a shot from the slot past Dell with 6:32 left to tie the game. Fabbri set it up with his seventh assist.