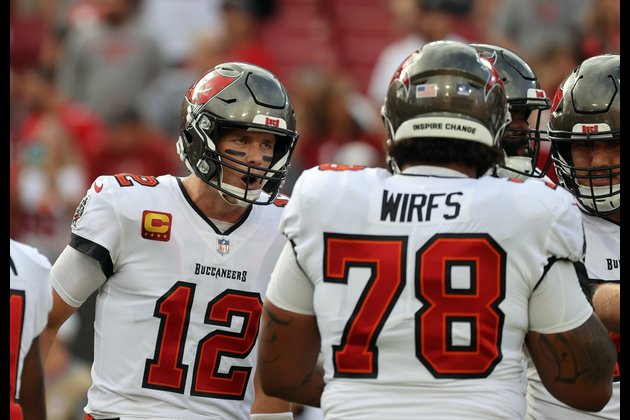 All-Pro right tackle Tristan Wirfs has a chance to play for the Tampa Bay Buccaneers in their next playoff game, despite sustaining an ankle sprain in Sunday's wild-card win over the Philadelphia Eagles, coach Bruce Arians said.

Arians told reporters Monday that Wirfs' right foot was in a walking boot but that he couldn't be counted out in the NFC divisional round this Sunday.

The Bucs will host the winner of Monday night's game between the Los Angeles Rams and Arizona Cardinals.

Wirfs, selected by the Bucs with the No. 13 overall pick in the 2020 NFL Draft, was injured in the first quarter. He attempted to return in the second quarter but was pulled after three snaps.

He had not missed a snap in any game since joining the Buccaneers.

Also sustaining an ankle sprain was center Ryan Jensen, who was injured as Tampa Bay scored a touchdown with 25 seconds left in the first quarter. He hobbled off after the play but returned for the next offensive series and played the rest of the game.

"His mental toughness is off the charts," Arians said of Jensen. "He's as tough a dude as there is playing this game. That thing was gonna be broken for him not to go back in."

The 30-year-old Jensen, a first-time Pro Bowl selection in 2021, played 97 percent of the snaps for the Buccaneers this season. Both he and Wirfs started all 17 regular-season games.