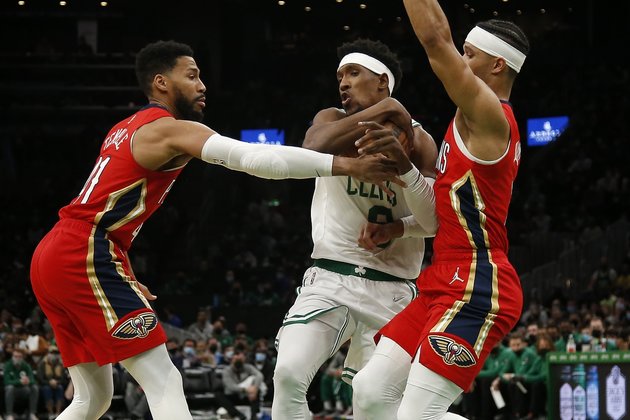 Jayson Tatum scored 27 points and grabbed eight rebounds as the Boston Celtics rallied from 18 points down to beat the visiting New Orleans Pelicans 104-92 in a Martin Luther King Jr. Day matinee on Monday.

Dennis Schroder scored 23 with nine assists and five boards, and Jaylen Brown had 23 points and eight boards. Al Horford contributed 12 points and seven rebounds for Boston, which earned a second straight win and its fifth in six games overall.

The Pelicans suffered a second straight loss after winning three of their four previous contests.

Boston played without starters Marcus Smart (COVID-19 health and safety protocol) and Robert Williams III (personal reasons). Smart missed his fourth straight game -- the first of which last Wednesday was due to a right thigh contusion.

New Orleans remained without star forward Zion Williamson as he rehabs a foot injury away from the team. Kira Lewis Jr. also remains out after suffering a season-ending ACL tear and MCL sprain in his right knee.

New Orleans was up 46-39 at halftime after stretching its lead to 18 in the second quarter. The Pelicans led 42-24 after Devonte' Graham's 3-pointer with 4:23 left before Boston closed the period on a 15-4 surge.

Boston took its first lead on Schroder's 3-pointer with 33.8 seconds remaining in the third as the hosts outscored New Orleans 32-23 in the third quarter to carry a 71-69 advantage into the fourth.

The Celtics continued their offensive onslaught in the final period, leading by as many as 17 while outscoring the Pelicans 33-23.

The Pelicans opened a 29-18 lead after the first quarter.