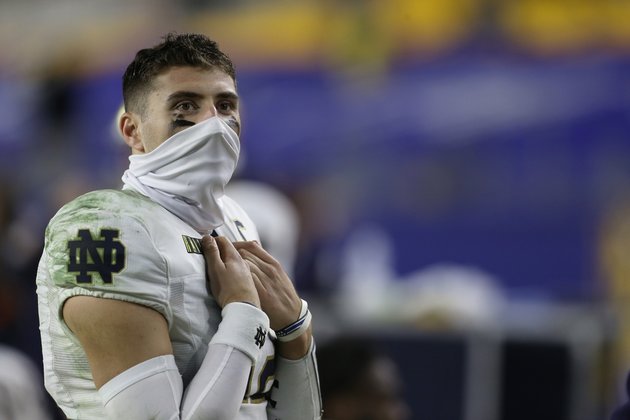 Ian Book threw for 199 yards and one touchdown and Kyren Williams ran for two touchdowns to help No. 4 Notre Dame to a 31-13 win over Georgia Tech on Saturday in Atlantic Coast Conference play at Atlanta.

Georgia Tech (2-5, 2-4) had no luck against the veteran Notre Dame defense, which had five sacks and nine tackles for loss, and dropped its third straight decision. Notre Dame's Daelin Hayes had five tackles, two sacks, two tackles for loss, two forced fumbles and one quarterback hurry.

Yellow Jackets quarterback Jeff Sims completed 15 of 26 passes for 150 yards. Jahmyr Gibbs led the team with 61 yards rushing on 14 carries and had five catches for 49 yards.

Notre Dame opened the game with a 15-play 81-yard drive that culminated with Book's 8-yard touchdown pass to Joe Wilkins Jr. Book was 8-for-8 passing on the drive.

Later, the Irish drove to the Georgia Tech 13-yard line, but Williams had the ball knocked loose by Juanyeh Thomas and it was recovered and returned 93 yards by Zamari Walton to tie the game. It was the longest fumble return in school history.

Notre Dame responded with a 75-play drive capped by Williams' 2-yard run and tacked on a 32-yard field goal from Jonathan Doerer for a 17-7 halftime lead.

Williams added a 4-yard touchdown run in the third quarter and Georgia native C'Bo Flemister scored on a 3-yard run early in the fourth to stretch Notre Dame's lead to 31-7.

Georgia Tech produced an offensive touchdown midway in the fourth quarter with Jordan Mason scoring from the 1.

The win sets up a showdown for Notre Dame against No. 1 Clemson on Saturday.