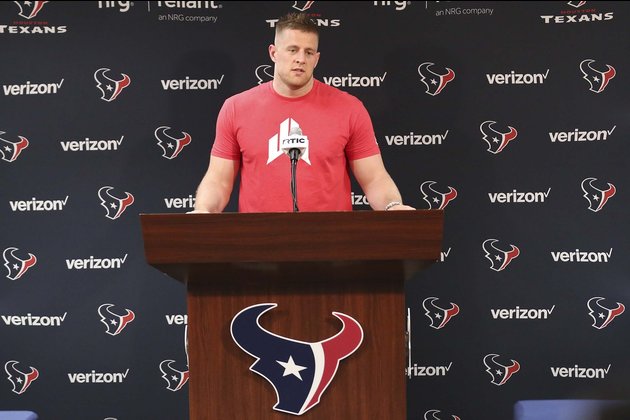 As Crennel sees it, Watt's boiling point is borne of an intolerance for losing.

"He will not feel better until we start winning. If we don't win, he's not going to feel better," said Crennel.

The Texans won't win this week. The team is on bye and big changes could be made via trade.

Crennel is focused on in-house issues, including finding time for a sit-down meeting with Watt. The former NFL Defensive Player of the Year again voiced his frustration with the results Sunday following a lopsided loss to the Green Bay Packers.

"We can talk about what's happening and what he perceives to be the issues and see if we can get those straightened out. But a lot of it will have to do with the guys who play on either side of him because J.J. is a pretty consistent player himself," said Crennel, who was elevated to interim head coach after Bill O'Brien was fired. "So, what we have to get those other guys is to be as consistent as he is. If we can get that done, then I think that we'll improve. I think that if he sees that and sees that we are trying to improve and get better, I think that that will make him feel a little better."

The Texans are a work in progress in terms of their personnel and scouting department as the trade deadline nears. O'Brien had final say on roster decisions and oversaw the football operations department. Crennel is one voice in that department as Houston hits reset, but his voice will definitely count when trade offers come rolling in this week.

"They'll come to me and we'll sit down and we'll make a decision about what we think is best for the team. I've been informed of some possibilities but nothing definite right now," Crennel said.

Watt is not thought to be on the trade block but with no first- or second-round pick in the 2021 draft, Houston might be more intrigued by such an offer right now. His name has been mentioned as a possibility for multiple teams, including the Green Bay Packers, Seattle Seahawks, Pittsburgh Steelers and New Orleans Saints. Watt said none of the rumors change his focus.

"My goal since I got here was to bring a championship to Houston," said Watt. "That remains my goal until the day I'm not a Houston Texan anymore."