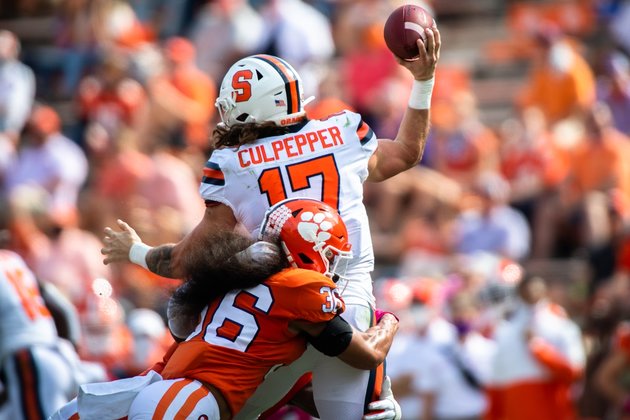 Trevor Lawrence threw for 289 yards and two touchdowns and running back Travis Etienne scored three touchdowns as No. 1 Clemson pulled away from Syracuse for a 47-21 victory Saturday at Clemson's Memorial Stadium.

Clemson improved to 6-0 overall for a sixth consecutive season and the 16th time in school history. The Tigers also moved to 5-0 in Atlantic Coast Conference play with their 27th straight victory against a league opponent.

Clemson jumped out to a 17-0 lead by the end of the first quarter. Lawrence had a 25-yard touchdown pass to Cornell Powell, B.T. Potter added a 24-yard field goal and Etienne had a 25-yard scoring run to build the early lead.

After Syracuse got a seven-yard touchdown run by freshman running back Sean Tucker, Clemson pushed its lead to 24-7 with a 17-yard strike from Lawrence to tight end Davis Allen, who has had at least one touchdown reception in three straight games.

But after going 12 games and 366 passes without being intercepted, Lawrence was intercepted for a second consecutive game. Syracuse's Garrett Williams picked off a pass that bounced out of the grasp of Clemson's Amari Rodgers and returned it 39 yards for a touchdown with 1:18 left in the first half to cut Clemson's lead to 24-14. It was the first "Pick 6" of Lawrence's career.

Another Potter field goal, this time from 36 yards out with one second left in the half, gave the Tigers a 27-14 halftime lead, but the Orange burned Clemson with an 83-yard touchdown pass from quarterback Rex Culpepper to Nykeim Johnson to make it 27-21.

Clemson responded by scoring 20 unanswered points to pull away. Andrew Booth Jr. had a scoop and score 21-yard touchdown on a fumble by Culpepper and Etienne added short scoring runs of 9 and 1 yard to cap the scoring.

Etienne finished with 86 yards on 16 carries and moved within 43 yards of breaking the all-time ACC rushing record held by former N.C. State standout Ted Brown since 1978.

Culpepper completed 10 of 26 passes for 175 yards and a touchdown for the Orange, but he was intercepted three times. Tucker led Syracuse on the ground with 63 yards and a score.